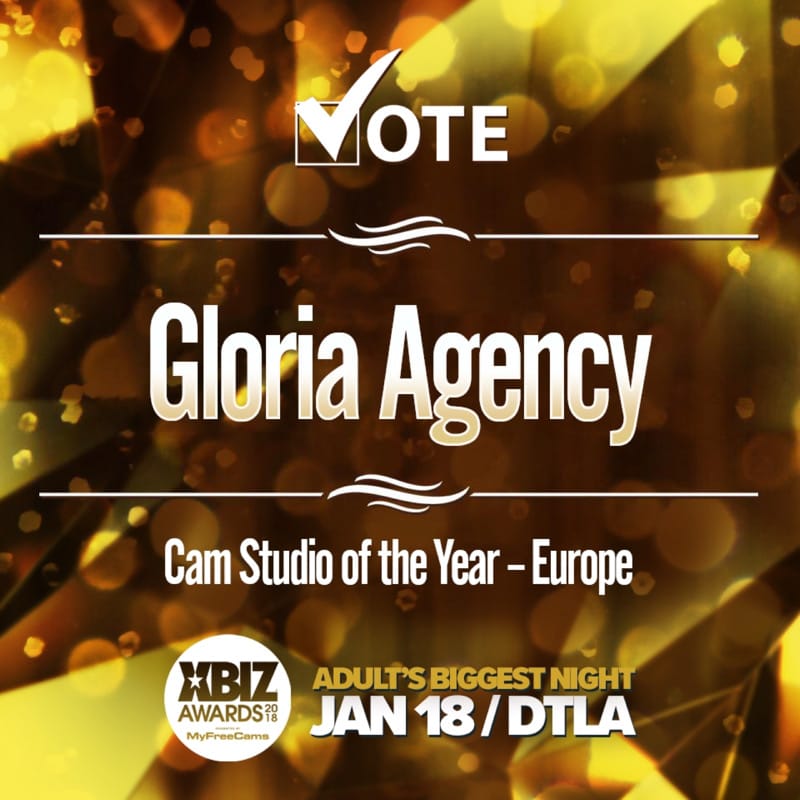 LOS ANGELES — Gloria Agency has been named a finalist nominee for the adult industry’s awards event of the year, the 2018 XBIZ Awards, presented by premier live cam network MyFreeCams.com.

Gloria Agency has received a nomination in the award category “Cam Studio of the Year - Europe”.

Nominees for the 2018 XBIZ Awards were selected based on more than 8,000 pre-nominations submitted by members of the industry via XBIZ.net.

A star-studded red carpet affair that hosts a who’s who from the business of sex, the XBIZ Awards is the adult industry’s biggest night and most prestigious symbol of success. The event recognizes outstanding achievements across every facet of the multibillion-dollar business, including movie production, pleasure products, technology and retail.

Since its inception, household names from the world of adult have hosted the event, including Jenna Jameson, Tera Patrick, Jesse Jane and Kayden Kross. Its worldwide reach has garnered international media coverage from renowned outlets such as the L.A. Times, CNBC, TIME, Cosmopolitan, New York Magazine, Huffington Post and The Daily Beast, among others.

The XBIZ Awards will once again coincide with the trade events series of the year, XBIZ 2018, which annually features an unparalleled lineup of industry thought leaders from international markets to explore the future of adult.

For the complete list of finalist nominees, visit XBIZ.com.

XBIZ™ is the adult industry's leading publisher of business news and information, providing up-to-the-minute coverage of the industry at XBIZ.com and in two monthly publications — XBIZ World for the digital media market and XBIZ Premiere for the retail market. In addition, XBIZ hosts a series of annual events including the adult industry’s biggest night, the XBIZ Awards. XBIZ is frequently cited in the media for coverage of the industry and has been published in New York Times, The Wall Street Journal, CNN, Fox News, Forbes, Newsweek, MSNBC, Wired, CNET, ABC, USA Today and Los Angeles Times, among others.